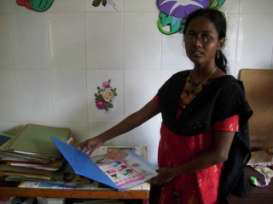 Young Abinaya in her blue sequined salwar kameez, sweat pouring in humid hot weather of Chennai enters SPASTN with just one thought. She needs to go for a quick makeover -a refreshing wash, a touch of talcum and her bindi in the right place in her forehead. Once done, she quickly checks her face in the mirror and on her way to the classroom asks her mother if her face is looks good.   Abinaya enters her classroom taking care to present herself as a confident and well-groomed Teacher Assistant of Early Intervention class.  Manimekalai mother of Abinaya shared that she was touched and could feel the hint of a tear in her eyes as she is seeing the first bloom of womanhood in Abinaya.  Manimekalai has single handedly supported Abinaya emotionally, financially and socially.

Since the time her husband gradually disconnected with family he has not ever for one day sat beside his daughter to talk or exchange a glance. Abhinaya does not exist for him. The only child he is willing, to acknowledge, is his older daughter who is now married. When the writing on the wall was clear that her husband is not interested in supporting the family, mother, Manimekalai took stock and resolved to raise her daughter single handedly without moving out of her marital home. Manimekalai sought the support of her family to finish her Masters and B.Ed program. While working in a mainstream school, Abinaya was with her in the school. Looking back she feels she also failed to acknowledge that Abinaya had difficulty coping with studies, was socially isolated and had no emotional connect with peers. Abinaya recalls only giggling and uncharitable remarks from her classmates and social isolation with no opportunity to participate in school culture. Abinaya gradually withdrew from the social world, had no expectations from people around her and perhaps created a world of her own, in her mind, that she could withdraw to and feel safe. Mother felt trapped as she needed the job on one end and at the other end Abinaya was socially and emotionally not thriving. She knew continuing in regular program is causing Abinaya great harm to her self esteem but she could not give up the job in school as salary was better and she needed the money for running the household.

Even to this day Abinaya speaks in a barely audible whisper. But when she is carrying her duties as Teacher Assistant. she laughs, guides parents and interacts with children in Early Intervention. Abinaya often escaped from all the humiliation in school by pouring her frustration into creative art whenever she painted or did handicraft. Mother Manimekalai shared that Abinaya is very creative in her work, be it painting of pots or other such handiwork. Abinaya showed red flags (signs of delayed development) as early as 5 months but the doctor  dismissed her worries by saying her growth is delayed is due to hypothyroidism. Abinaya recalled that only when she joined SPASTN that she got her first friend at age 16. Mother also regrets that she is some how responsible for her present condition (stigmas) in some ways.  She fears animals, people, markets etc.

But leave her in the classroom she is like a Diva Madonna talking to parents, wishing them and also telling them how they can work with child as shown by classteacher. Mother Manimekalai stated that she saw her daughter smile first time when she sat with her classmates. Today Abinaya as Teacher Assistant is gradually moving out of the cocoon of fears and shyness that even to this day keeps her sometime enmeshed and hesitant. She is now gradually showing interests in makeup, accessories for her salwar, bangles and also spends time peering at the mirror. Mother is happy to see Abinaya bloom slowly and surely as a women. Abinaya also spends her evenings with her nephew Jayarakshan. She dresses him, and spends time teaching him to name objects and also to identify his body parts. Jayarakshan at 1.5 years who is having a doting aunt who is keen to buy books and coloring pages for him. Abinaya is now happy in a world where she is loved and accepted. Mother Manimekalai stated that she would like other parents in similar situations as her to accept their children as they are, and encourage them to do their best.